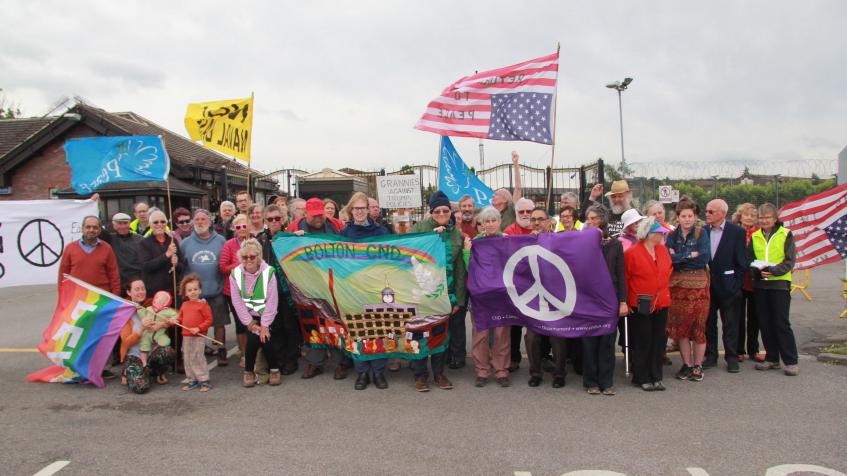 The annual ‘Independence from America Day’ took place at the Main Gate of NSA Menwith Hill, on Thursday 4thJuly. The purpose of this event is to highlight the lack of accountability of the base and its occupants. This surveillance base is closed even to UK Members of Parliament and maintains secrecy about its actions - for example the directing of drone attacks and economic spying. The base continues to expand and this fact was highlighted by the appearance during the demonstration of an official from Harrogate Borough council, who fixed a Planning application for three new radomes to the lamppost adjoining the main gate of the base.

More than 50 people travelled to the demonstration from all over Yorkshire, some by bicycle. They were entertained by the band Reason Breeds Monsters and by the East Lancs Clarion Choir, as well as by poet Andy Croft.

There were three very informative speakers, who had travelled from other parts of the country, in support of the demonstration.  Jenny Clegg, from the Campaign for Nuclear Disarmament Global Dangers Tour, spoke about the increasing threat to world peace posed in particular by the breakdown of relations between America and Iran.

Robin Brookes, of Conscience, the Peace Tax Campaign, encouraged those present to consider withholding taxes which go to buy arms or carry on wars. Instead, money from taxes should support the NHS and Social Care.

Celia McKeon, of Re-thinking Security, explained the work of that organisation, which is making progress towards a new way of considering how to resolve conflicts, de-escalate tensions and provide alternative solutions to using war.

The demonstration was organised by the Menwith Hill Accountability Campaign www.themhac.uk

and by Yorkshire CND www.yorkshirecnd.org.uk