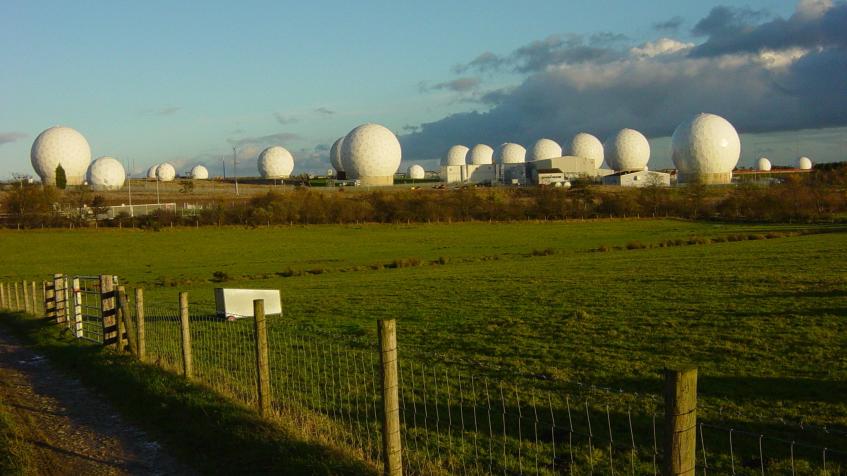 Menwith Hill is a US base on 545 acres of land in beautiful Nidderdale (one of the Yorkshire Dales) near Harrogate North Yorkshire HG3 2RF UK.  The base is in an area of outstanding natural beauty (but officially left out in the early 1990s despite some of us trying to include it!).  The land was compulsorily purchased by the MOD (War Office) in 1954 and access and right to use the land was given in 1955.  These decisions were made by a few people,  behind closed doors and never debated in Parliament.

Construction started in 1956.  Local people opposed the development of the base since first hearing about the proposed plans and the pending arrival of the US Visiting Forces (USVF). The base published a booklet in 2010 to ‘celebrate’  50 years since the base first became ‘operational’ on 15 September 1960 (50 years of the US Visiting Forces and their Agencies in occupation and control of the base!). The 421st Air Base Group is located at Menwith Hill and is a component of the 501st Combat Support Wing which has its headquarters at USAF Alconbury, near Huntingdon, Cambridgeshire.

The base is run by the National Security Agency of America. In 2004 the base was taken over by the US Air Force. “We received word from Gen. Hayden at the NSA that MHS needed to follow the “one base - one boss philosophy” said Colonel Roberts (US Commander at the time). The National Reconnaissance Office is also present at Menwith Hill (NRO website). It is part of a global network of Signal Intelligence (SIGINT) bases. Menwith Hill is a key regional center for the NSA monitoring and intercepting the world’s communications. Gleaned and encrypted information is relayed to NSA HQ at Fort Meade in Maryland USA.

The land is in possession of the UK Secretary of State for Defence. The majority of the buildings and facilities at Menwith Hill (as with all US bases) are owned, and the construction paid for by the US. To date there are 33 radomes (white covered satellite dishes - looking like giant ‘golf balls’). The base has grown and grown over the years. A significant development and major expansion of sophisticated operational facilities, known as Project Phoenix (costing £52 million) was completed in 2012.

What Does Menwith Hill Do?

Menwith Hill is the largest intelligence-gathering, interception and surveillance base outside the US. It has many roles which are generally for US interests only (diplomatic, military and economic) – being the hub of the ECHELON  global surveillance system (Wikipedia). However, in May 2013 an unknown and very important whistle blower called Edward Snowden disclosed thousands of top secret documents which revealed the extent of the intelligence gathering and surveillance on us all by the NSA/CIA (with the help of GCHQ). Menwith Hill is mentioned several times in the documents.

The base is unaccountable, secretive and out of control of the UK government. After Edward Snowden revealed thousands of documents there have been many articles in the press about the lack of scrutiny by Parliament of US bases in general and in particular the NSA especially at NSA/NRO Menwith Hill.

Ostensibly the Intelligence and Security Committee (ISC) keep an eye on Menwith Hill. However the ISC are not told everything and they have restricted access to the Operations Area. The Home Affairs Select Committee said of the oversight by the ISC in their report on the security services in the UK: “We believe that the current oversight is not fit for purpose for several reasons”. The US authorities decide how much to reveal. MPs can visit but this is usually on a social basis. They were not party to the inner workings of Menwith Hill. Access has even been denied to some MPs.

A consortium of Mace, Turner & Townsend and Atkins (MTA) has been appointed as delivery partner by the MOD’s Defence Infrastructure Organisation (DIO) on the US Visiting Forces Infrastructure Programme at RAF Fairford in Gloucestershire and RAF Menwith Hill in North Yorkshire. (Source: Specificatioinonline.co.uk      and  Building.co.uk   12 January 2022)

US Air Force Deployment in the UK

US Air Force Deployment in Britain is third largest in the world.

What role is Menwith Hill's role in the Ukraine War?

What is Menwith Hill's role in the Ukraine War?

Newspaper article about the likely role of Menwith Hill in the war in Ukraine.

The issues are very complicated.