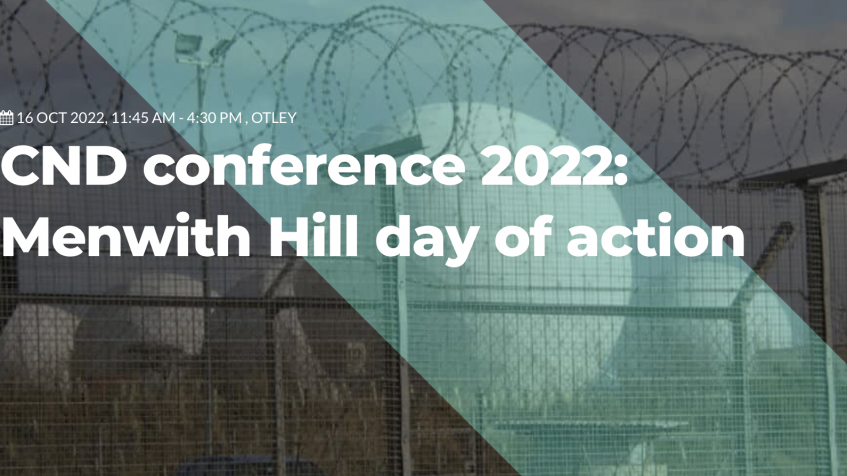 “The Menwith Hill base has been shrouded in secrecy for decades and it has taken the actions of courageous whistle-blowers, dogged campaigners and investigative journalists to bring to light its role in a vast state surveillance apparatus, assassination programme and US missile defence.”

The Global Network Against Weapons and Nuclear Power in Space has been calling for several years now for global actions and events during this week to “Keep Space for Peace” some will be held online – but other live at bases and towns and cities across the world – a list of events that have been notified so far is available here.

The U.K.’s role in the militarisation of space has been outlined in a recent report issued by CND and Drone Wars UK. Called “For Heaven’s Sake” it goes into some details of how the UK government and the MoD are considering space as a serious development for war fighting.

This year Keep Space for Peace Week is being held from October 1th – 8th and In the UK there is a focus on bases associated with space activities – Menwith Hill (October 16th) and Fylingdales (October 9th).

The event at Menwith Hill is being hosted by Yorkshire CND as a public participation component of CND’s Annual Conference, and so we will focus on that here.

‘RAF’ Menwith Hill is situated 8 miles outside Harrogate in North Yorkshire on the A59 to Skipton. From the outside it looks like an ordinary RAF station, but there are no runways present and no aircraft are stationed there. The base is in fact run by the United States National Security Agency (NSA) and is their largest overseas electronic spying and surveillance base. The Government Communications Head Quarters (GCHQ), the UK equivalent of the NSA, also has a large presence and the two organisations work closely together.

The base can be seen from miles away when approaching by road from Leeds. Over 30 clearly visible giant ‘golf balls’ stand out clearly and each one holds a satellite dish that receives data from a specific satellite that it is aimed at. That data has been intercepted from other satellites or from ground transmitters, When it arrives at Menwith Hill huge computer systems sift through it, searching for anything that may be of interest to the US and/or UK intelligence services. Any items of interest are then fed back to NSA HQ in Maryland, USA.

In 2013 material released by US whistle-blower Edward Snowden exposed Menwith Hill’s role in “mass surveillance and extrajudicial killings,” and provided “a snapshot of transparency” about its activities. It has been revealed that eavesdropping technology at Menwith Hill is capable of collecting data from hundreds of millions of emails and phone calls a day and of pinpointing communication devices on the ground. The UK and US intelligence agencies have also been exposed as using these capabilities to spy on leaders of allied nations, aid agencies and vast swathes of the population.

Menwith Hill is also involved in the US “space wars” programme — three of the base’s satellite dishes act as down link stations for space-based components of the US missile defense system.

In October 2021 Yorkshire CND and the Menwith Hill Accountability Campaign (the successor to the Campaign for the Accountability of American Bases, which campaigned so passionately against all U.S. military bases in the UK) launched a joint report called “Menwith Hill in 3D: Domes, Data & Drone Strikes”. Written by Barnaby Pace, the title was chosen to emphasise the major roles that Menwith Hill plays for the U.S. and the U.K.

The report reiterates that the UK government has publicly stated that all activities at the base are carried out with the ‘full knowledge and consent’ of British officials” making them complicit partners and in its conclusion states: “The Menwith Hill base has been shrouded in secrecy for decades and it has taken the actions of courageous whistle-blowers, dogged campaigners and investigative journalists to bring to light its role in a vast state surveillance apparatus, assassination programme and US missile defence.”

There will be a walk around the base on Sunday 16th October 2022. Walk will start at 2pm from the entrance to the Nature Reserve close to the Main Entrance to the Base. Park on the small road on the there side of the road leading to a farm and the sewage works.